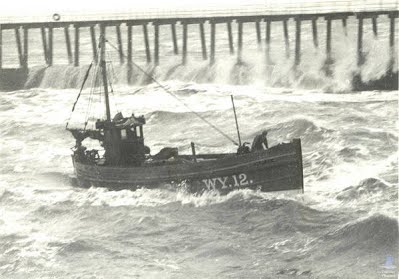 When my uncle lost his fishing boat in the winter storms of ’74, he barely escaped with his life.

Watching as the Mary-Mae disappeared, bubbling, spitting and groaning into the dark, icy North Sea, he and his 6-man crew clung onto their rudimentary rubber dinghy just long enough for the lifeboat to show up and tow them back to harbour.

3 weeks later, and flushed with an insurance payout, he decided not to invest in a shiny new craft.

Instead, he’d salvage the scuttled vessel from its current resting place in the shallows, and have a go at patching it back together.

After all, he was a parsimonious Yorkshireman, and “waste-not-want-not” was his by-line for life.

7 months passed, along with all his cash.

He’d laid off his lads, who quickly got jobs with the rest of the fleet, and by the next winter, he’d managed to get the old girl back to some kind of ship-shape.

Meanwhile, all the other fishermen enjoyed one of their best seasons ever, nets bulging with valuable catch every morning.

Although the Mary-Mae sailed again, uncle had to hire a second-rate crew, the boat was never quite right, and he never recovered from his bad luck.

WHY ARE YOU TELLING ME THIS, JONNY?

He’d failed to understand the concept of a sunk cost (literally).

And in your 21st century coaching or therapy business, you have to watch out for sunk costs:

> Your original investment was flawed but excusable – charlatans can be persuasive.
> But your decision to continue pouring new time and money into an old mistake is now inexcusable.

Don’t let the misjudgements of your past become the blueprints for your future.

Move on, and get some practice making better decisions.